Here’s a scenario for you. Petrol runs out and Solar plus electric doesn’t provide the answer to our transport needs. What would you use? Riding a horse is time consuming as it will take you a while learning how to do it properly without falling off every five minutes and risking serious injury. There is an example from the past; employ the services of a palanquin or litter! 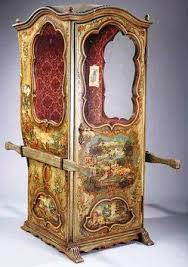 What is a palanquin? Well, glad you asked because they might prove to be a money spinner in the future. They are known in the UK as a sedan chair and you can still see some in Museums where they are well preserved. The basic idea is that you have a comfy seat that is then covered like a box. Windows, so you can see out, are optional but they were certainly included when first used so that the people you passed by could see how rich you were to have one. They also had curtains in case you fancied a bit of privacy. 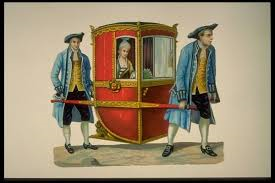 Two long poles, or yokes as they are known, were fitted to the side through brackets and then removed when the palanquin arrived at its destination. You get out, quite regally, though a side door. Here is the environmentally friendly part. You get two people, the porters, to carry it everywhere with you in it; I expect that they’ll appreciate it that you watch your weight. There are ones, such as the Chinese models, where the yokes could rest on the shoulders of the porters making it a bit easier. I can’t say that it was a particularly smooth ride and the speed might vary especially if you have to go uphill. They were often used to transport royalty and the upper classes. However in some cultures the elderly were also transported in these carriages. Thankfully those that work in Live in Care Somerset way have much easy means to get their clients up and moving, but it is a nice thought.

The tradition goes right back to Egyptian and Roman times so you could argue that you’re just reviving a form of heritage transport. However, they did use slaves back and your new porters may want to discuss much better terms and conditions. The options available were very decorative. Why not get a nice over the top Rococo one for example? It could be the new car sharing. Find two people who work in the office and share the duties on a rota basis for who is riding in it and who is going back or front. It will be a great way to get fit.