If you have a tropical freshwater aquarium, or you are thinking of riding one soon, there are 11 types of freshwater fish that you should know.

Their spectacular colors, stylized forms, and sinuous movements make them perfect pets to create a relaxing and hypnotic submerged landscape. With these incredible animals, you can not stop looking at your aquarium.

The best types of freshwater fish for the tropical aquarium

The guppies are probably the most widespread freshwater fish in the world of aquariums.

They are sold in almost all aquarium stores, both physical and online, so it is very easy to find them.

Their small size, easy maintenance and their propensity to reproduce in virtually any environment, has made them one of the most ubiquitous and valued freshwater fish. 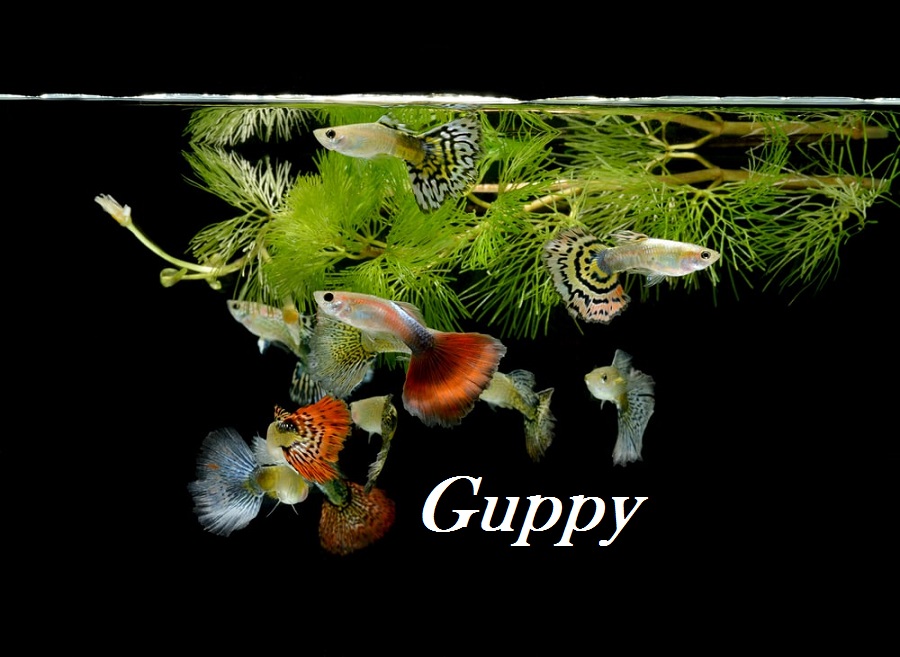 The guppy attracts attention by its colorful tail fin in the form of a fan (the tail), which moves in rapid and nervous movements throughout the aquarium.

It belongs to the family of the Pecílidos, that lodges species of fish of fresh water very varied in color and form.

Curiously, the aquarium guppies are very similar to their wild brothers, since their characteristic colors are the result of selective breeding.

The males are much more colorful than the females and fertilize them internally by means of a reproductive organ called gonopodium.

In fact, sometimes it is even counterproductive how fast they reproduce. If you mix males and females in the same fish tank, no matter how pretty or comfortable it is, the guppies will reproduce by filling you with the baby aquarium. 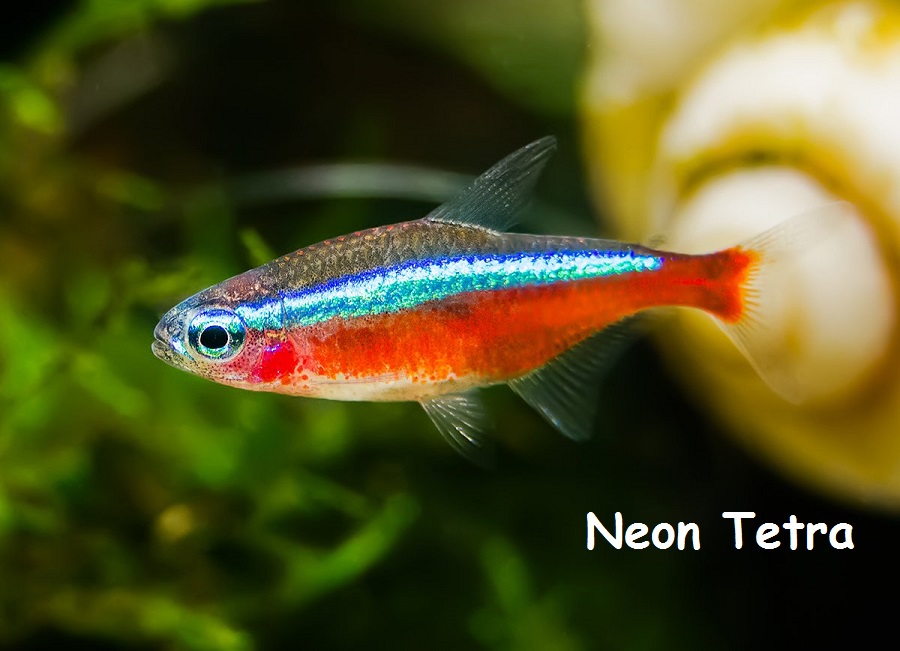 The tetra fish are, by far, the most valued in aquascaping or aquatic landscaping.

The best aquascapes in the world (such as Takashi Amano ) always include them in their aquariums, because they perfectly complement any planted aquarium.

Its scales are dotted with incredible colors: neon blue, red, orange, black and white, yellow … its body has a stylized shape and its caudal fin or tail is usually small (unlike guppies).

They tend to group and swim in banks, which creates a harmony in the landscape of our aquarium difficult to overcome by other species of more chaotic swimming.

If you have a planted aquarium and want to give prominence to the landscape, and at the same time enjoy quiet fish and perfectly integrated into the aquascape, tetra fish is your best option. You also feel bother to clean your freshwater aquarium here we give some tips how to clean a freshwater aquarium quickly and efficiently.

There is a real fever for these impressive freshwater fish, originally from Thailand.

Many aquarists dedicate specific aquariums to them and they are fond of perfecting their reproduction to get copies never seen, or simply enjoy the view they provide on the bottom of a planted aquarium.

Selective breeding has caused us to find great variations of color and shape of the fins, very different from wild specimens. 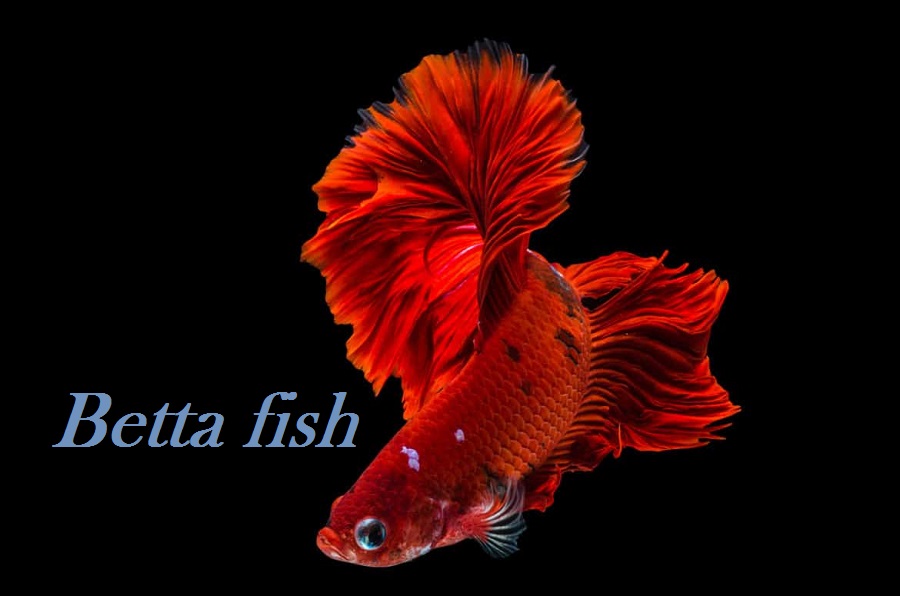 Betta fish have vibrant and eye-catching colors. These aquarium freshwater fish are characterized by long fins, which unfold or comb backward creating visual effects of color and movement completely hypnotic. They can measure more than 6 cm. and it’s so easy to take care, if you maintain some points.

We must bear in mind that they are highly territorial fish. Each one needs a space of at least 20 liters, so we cannot keep more than one in small urns.

Neither can we put two males together in the same aquarium due to their aggressiveness. In fact, there are countries in which they are used for fights with bets (something despicable).

It is very important to mention that these aquarium freshwater fish have been cataloged as a “vulnerable” species by the Red List of threatened species of the IUCN, mainly due to the destruction of their habitat.

The IUCN strongly recommends captive breeding of the wild populations of these freshwater fish. 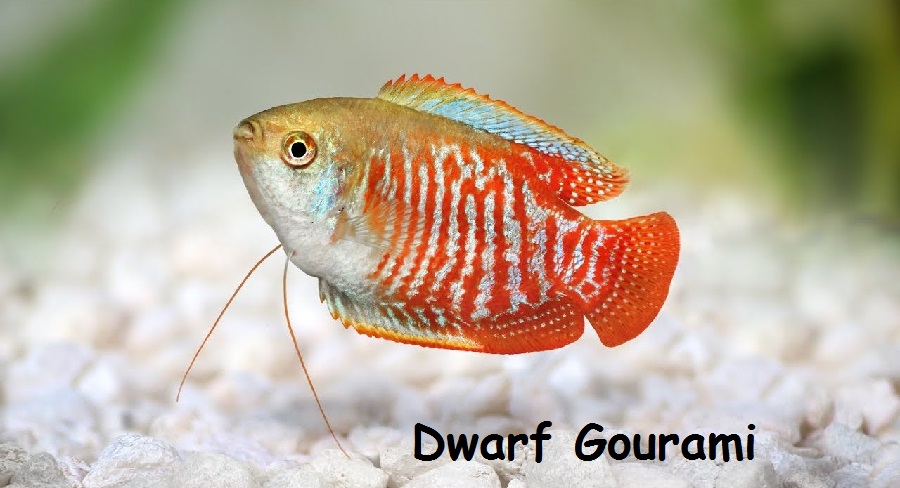 The gouramis belong to the same family as the betta fish, they are labyrinths. The labyrinths share the common characteristic of needing to ascend to the surface to obtain oxygen from the air from time to time.

They can do it thanks to an organ called labyrinth. They also have gills, but these are not enough to provide them with all the oxygen they need. That is why it is very important that they have access to the surface of the water.

The gouramis are very striking aquarium freshwater fish: they have a flattened and quadrangular body due to the extension of the fins, with a very varied display of colors in some species.

They are large freshwater fish: without going any further, the “dwarf” gourami, which is the smallest species, reaches 6 cm in length.

There are guramis that can reach 13 and up to 30 cm in length. Find out about the species you are buying, just in case. Here you can see the species Colisa lalia (dwarf gourami), which is the most maintained in aquariums after the Betta fish:

To maintain a pair of dwarf gouramis you will need at least one 75-liter aquarium. They are very compatible with other fish if we talk about behavior, but quite solitary, so they do not need much company of their own species.

If you have an aquarium planted with numerous hiding places, a gourami fish will feel at home.

The kings of the aquarium are, without any doubt, the discus fish. They come from the Amazon, where piranhas and other fish are their natural predators, so they have developed scary behaviors.

They have so special shapes, sizes, and colors that they have won the admiration of any aquarium enthusiast.

Practically all aquarists who start in the world of aquariums dream of having discus fish. But for that, you need a lot of experience. 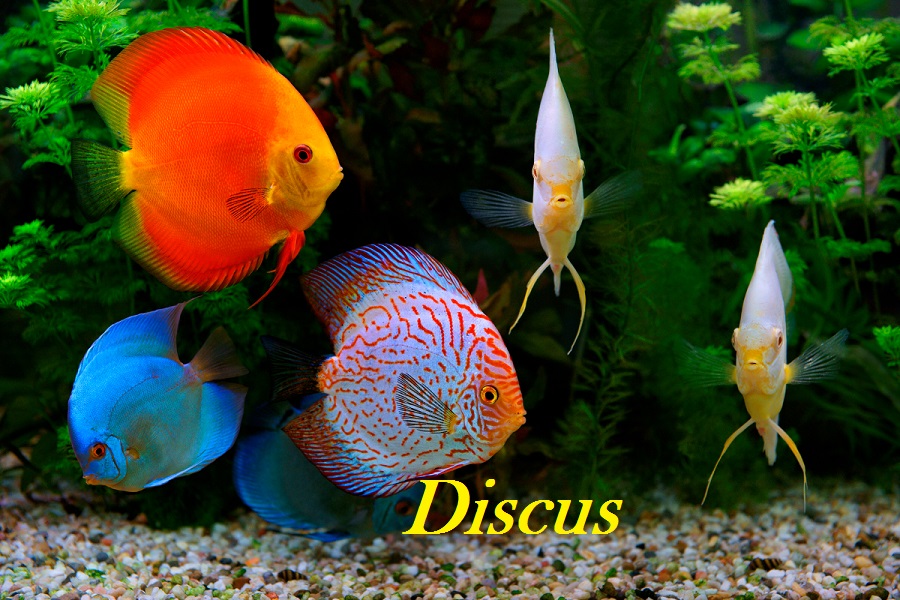 Discus fish are large, fragile animals that are extremely sensitive to variations in aquarium conditions.

They are susceptible to being attacked by fungi and other diseases as soon as the parameters of the fish tank move a bit from their usual range. They are also quite demanding when it comes to food.

Therefore it is necessary to have tables in the world of aquariums and to master the parameters and chemistry of the fish tank. It is advisable to maintain a minimum of 4 discs, for its hierarchical social system, and an aquarium of at least 300 liters.

If you are a beginner, get experience with your current aquarium. In the future, you can get these wonderful freshwater fish for the aquarium. 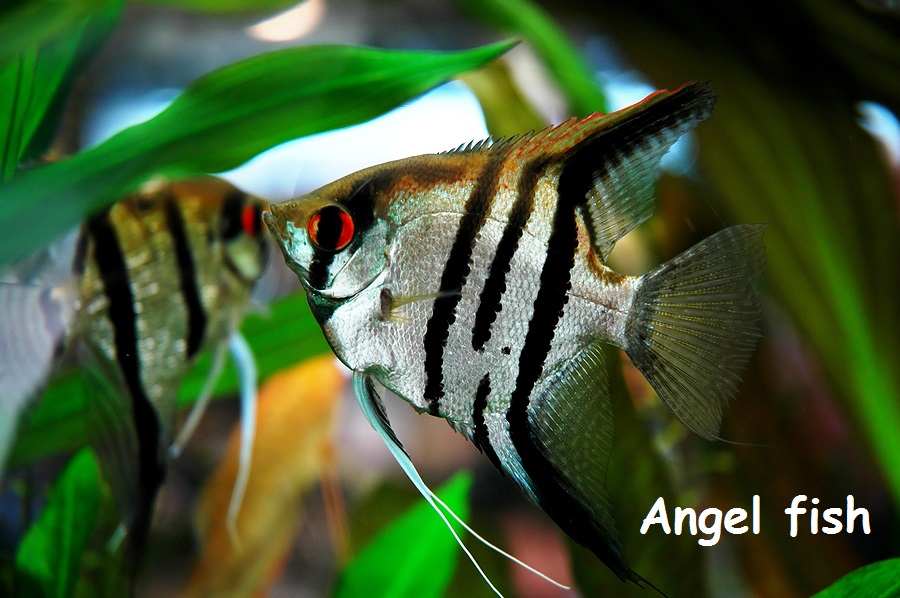 Angelfish are freshwater aquarium fish with a very peculiar shape, which has made them very popular in the aquarium.

Its body is flattened laterally, almost rhomboidal thanks to its fins. These freshwater fish are the closest thing you will find to the great marine angelfish.

These incredible fish are grouped and move together, creating a true spectacle for the eyes.

The largest species can reach 20 cm in length and 50 cm in height with the fins deployed.

There is a smaller species with 15 cm in length and 25 in height. As you may have guessed, they need large, and above all, tall aquariums. In this video you can see how scalars are (they also focus on ghost tetras):

It is clear that the family of the Cichlids leaves us freshwater fish species of great value.

The ramirezi are a clear example of why we love aquariums. Its yellow, orange, black, red and electric blue colors are incredibly striking. They are native to the Orinoco basin, in South America. 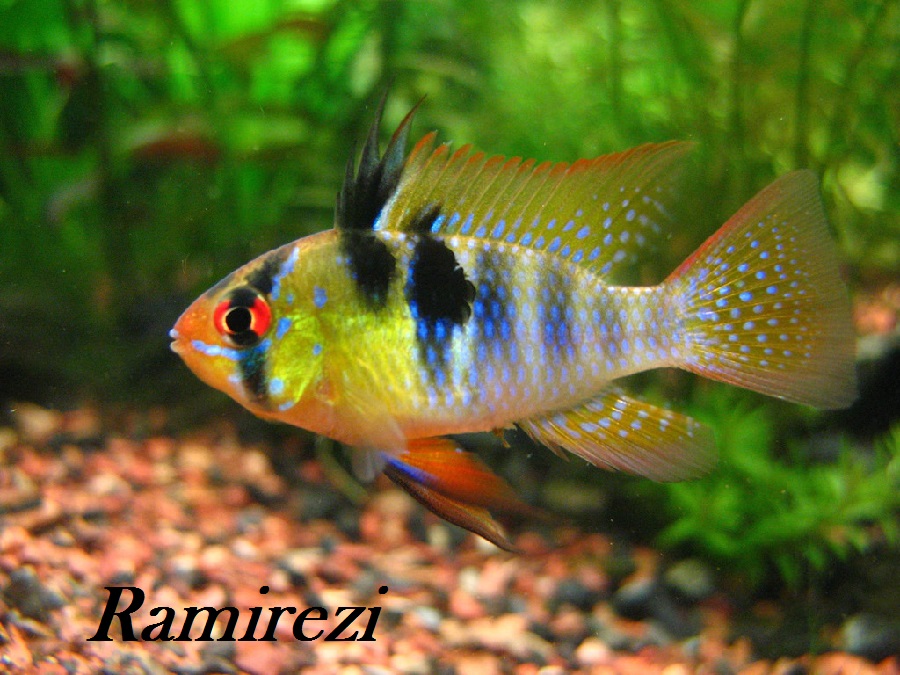 The shape of your body is stylized, proportioned and harmonious. It is one of the aquarium freshwater fish that best fit in a planted tank. Also, it does not take too much space to maintain them.

A couple can live without problems in a 40-liter tank with abundant vegetation. You’re in luck, in this blog we teach everything about the planted aquarium!

Of course, the males are very territorial and require much more space if you want to have two together in the same aquarium. The maximum size of these freshwater fish is 7.5 cm in the case of males and 5.5 in females.

Platys are, together with guppies and mollies, one of the best-selling and popular freshwater aquarium fish species.

This fish easy to maintain, reproduce, and have a perfect size to keep in almost any type of aquarium. They come from America, and they stand out for their combinations of red and black, or blue and black.

They have a somewhat chubbier body than the guppies and the less showy caudal fin, but they are still nice and resistant freshwater fish for aquariums.

Like all poeciliids, they have a great propensity to reproduce, and they have a peaceful behavior that is very compatible with other species.

They are ideal for community aquariums with a great diversity of freshwater aquarium fish species. 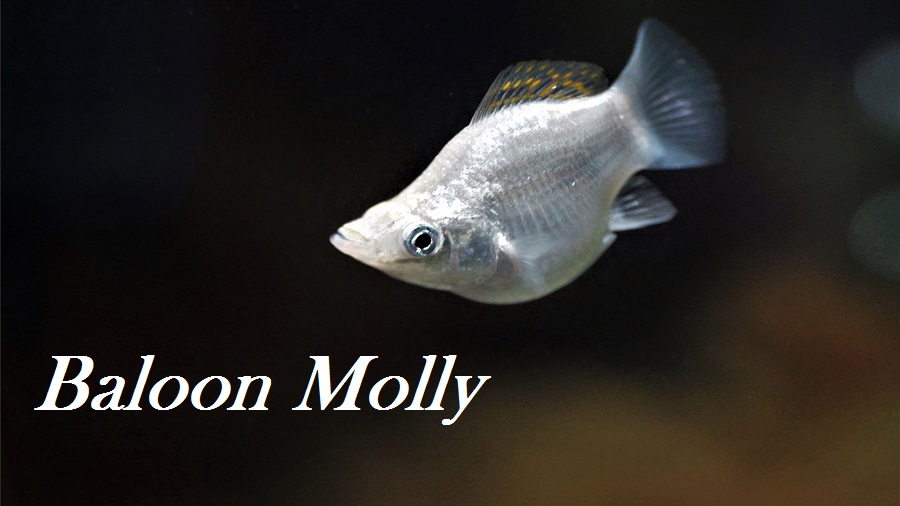 The mollys have a shape that is halfway between the guppies and platys, and also have very similar behaviors and characteristics: low requirements, small size, ease of reproduction, behavior suitable for community aquariums, etc.

They are also from America.

The colors of these freshwater fish for aquariums are very interesting, although they tend to be more monochromatic than other poeciliids.

They do a good job in the aquarium cleaning it of algae. It is usually recommended that 3-5 females be kept for each male so that their attention is not focused on one.

This incredible fish for freshwater aquarium comes from the Asian continent and stands out for its transparent body.

This feature allows it to camouflage itself among the vegetation and avoid its natural predators. The skeleton and certain internal organs can be clearly seen through the scales. 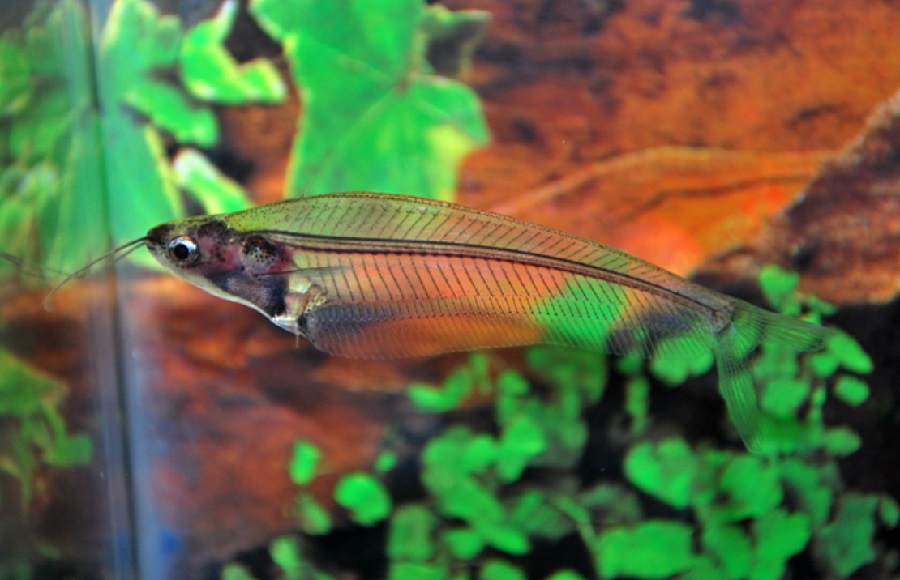 They belong to the family of the catfish, and in captivity, they can reach 10 cm or even more.

It is a gregarious fish, that is, it tends to join other individuals of its species and advances in groups. They are of peaceful behavior, and they need a large planted aquarium with multiple hiding places and nooks and crannies.

Although they have a long life expectancy (up to 7 years), they are very sensitive fish, which will react to any change in the parameters and conditions of the aquarium. They should never be left alone.

It is a very curious fish in appearance and behavior: a bank of catfish glass will have a shocking effect on our planted aquarium.

The killifish are one of the types of aquarium freshwater fish most loved by beginners: they have colors that rival other larger fish and are easy to maintain.

Their resistance and incredible appearance have turned them into a good option for those who start in the aquarium.

Of course, they are more difficult to find in aquarium shops than other more widespread species, such as guppies, mollies, platys, etc. Aquarists specialize in the breeding of killifish and exchange specimens among them.

They do not need very large aquariums, and generally, it will be enough to maintain the proportion of 2-3 kills per 20 liters.

It should be noted that killifish tend to jump out of the water, leaving the aquarium. If you expect to keep some kind of skill, be sure to cover the aquarium.

Have a great day!!

How to Start a Cleaning Business with No Money

3 Ways You Can Spruce Up Your Children’s Clubhouse

Replacing Old Windows: What You Need To Know