Did you know that oak trees have huge significance in both religions and mythology? The acorn, in particular, has important symbolism for power and strength. When the tough little acorns land on the ground during the autumn, most will be a life-giving food supply for local wildlife, but some will go on to be the oak trees of the future. The acorn is also a symbol of patience, as it only appears on fully mature oak trees. Therefore, it is often used to represent perseverance over time and patience to achieve an end goal.

Across the world, many cultures have held the oak as a sacred tree. It is featured in many legends where gods and goddesses interact with mortals on earth. Most of the European civilisations have venerated the mighty oak and it is associated with many deities from different religions and mythology. The oak was worshipped by the Celts, Greeks, Romans and Teutonic tribes of the continent. The oak was especially connected to gods of storms, thunder and lightning. This is probably due to the fact that oak trees are more prone to lightning strikes than any other species of tree.

In Norse mythology, Thor sheltered from a bad storm under an oak tree. In Nordic countries today, many people still place acorns on their windowsills, believing it will protect from lightning strikes. In the UK, one tradition involves young women wearing an acorn as a necklace as a talisman against aging. The Druids of the British Isles performed many rituals in oak groves.

The oak tree was much venerated probably as a result of it being hit by lightning, but as the tallest tree around, it would have been more prone to this kind of incident. When a tree was struck, it continued to live, and the Druids believed the presence of mistletoe on the tree meant that it was magical and had been placed there by the lightning. 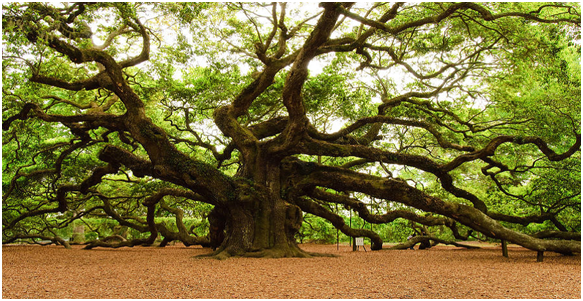 Many ancient rulers would wear crowns made from oak leaves, as they believed it signified their connection with the deities. Roman generals who had done well in battle would be served with an oak leaf crown on their return. It is still used as a symbol in many military organisations around the world today. If you’re thinking of installing a porch to your home, consider the finest oak from this most loved of all trees. For a stylish Oak Porch, visit http://www.bespoaktimberframes.co.uk/portfolio_page/oak-porch/

There are some very famous oak trees in the UK, such as Gog and Magog, ancient oak trees that are said to be the last remaining trees of an avenue of oaks that lined the way to Glastonbury Tor. Sherwood Forest contains the Major Oak, where it said Robin Hood and his band of Merry Men planned their raids and actions.

During the time that King Henry VIII sat on the throne, oak became a popular construction material for houses for the wealthier members of society. Oak groves in Scotland were managed and used to supply vast amounts of timber to cities in England. The bark was also used to create writing ink.