Many people have heard of Florence Nightingale and the work she did in saving lives during the Crimean War, but fewer people have heard of Edith Cavell. This is a shame because Cavell’s work was just as important as that of Nightingale’s. They are both noted during medical training and GPs who work in regular practice or as locums will be aware of the work they undertook. As a quick aside if you are a GP needing Locum Insurance to help cover the costs of employment cover you might want to look at MPRS locum insurance who can help you.

Edith was a British nurse working in Belgium during the First World War. During this period of time, Belgium was occupied by the Germans. There was no formal nursing profession in Belgium at the time and she is credited with being the founder of nursing in the country.

When Cavell heard of the outbreak of World War One and the imminent threat that Belgium was facing of being occupied she left her mother’s house in Norfolk (she was visiting her at the time) and headed back to Brussels. In the August of 1915, the nursing school was turned into a Red Cross hospital and treated casualties from both sides of the war and also continued its work in helping ill civilians. 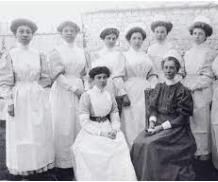 After helping two British soldiers who had been injured, Cavell arranged for them to escape from German-occupied Belgium by having them smuggled into the Netherlands. Over the next year, she continued to help soldiers to escape. It is thought that she helped over 200 soldiers from Britain, Belgium and France in this period of time.

Since was arrested in August of 1915 for the role she played in helping these soldiers to escape from Belgium during the war. She was placed in St Gilles Prison and was tried on 7th October 1915 with another 34 people connected to the same network as Cavell. She was found guilty and was killed by firing squad on 12th October 1915.